Sorry about the delayed posts... but, the weather was pretty bad and we found ourselves without internet access for most of the remainder of the trip and since we have been home, we have been caught up with catching up.  Trust me there was plenty to talk about, both from South Dakota and Wisconsin!

The night from hail… after we made the previous post about what we did on day one in the Black Hills of South Dakota, we decided to head into Hill City to get a quick bite to eat.  As we approached town, the clouds got darker and the rain started.  Beth said “Was that hail I heard”… “naww, it’s just raining hard”, I said… Oh well, in about 30 seconds, I was looking for a place to pull over to escape the ice falling from the sky.  We did find a parking lot that was slightly protected and luckily the hail ranged from pea to marble sized, so there was no damage to the rental car.  After sitting in the hail storm for well over 10 minutes, we decided to bypass dinner for now and go back to see if the tent was still standing after the rain settled down.

KOA, Washed away!…Wow, as we pulled into the campground, the second wave of rain hit us.  The hail from the previous wave was pilled up inches deep as we turned into the campground.  At this point, we just knew the tent was destroyed and all of our stuff was wet.  When we made it to the bottom of the hill where our tent was located, we were met with a wall of rushing water carrying sand and gravel and most of the road down from above… this made for VERY loose material to drive on and that is where we stopped moving!  Well crap… at least we were stuck right in the middle of the road, so the KOA folks would eventually have to 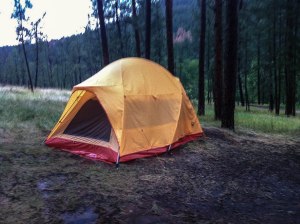 Big Agnes after “round one” with the elements…

come push us out – so we waited  – but, not for long.   Out of the woodwork, help came from every direction in the form of six or seven barefooted, kind-hearted souls who literally picked up the front of our underpowered rental tin can and moved us out of the loose sand and gravel.  In no time at all, we were liberated and moving up the hill again.

Best Tent Ever! (hold that thought)… So when we did make it up the hill, much to our surprise, the tent was still standing!  Our neighbor’s large “kitchen” tent had collapsed with broken poles and such but our Big Agnes was still alive.   After the rain stopped we went through all of our stuff in the tent and it was all still dry and in good shape.  A few minutes later our neighbors arrived to assess the situation and from the looks of it, their “sleeping” tent was OK too, but… it is starting to rain again!  So, to get out of the weather, all 6 of us pile into the Chevy Aveo for shelter.  It is amazing how much camaraderie there is among campers and folks that like the outdoors.  Our new friends from Bismarck, North Dakota had two great kids and were fun to visit with.  After this last small shower passed, Beth & I decided we would head back into town to eat.

Karaoke from hail…  We rolled into Hill City and found what kinda looked like a “Biker-Bar/Mexican Restaurant”.   Margaritas seemed to be in order for the two of us, along with some pretty good food.  As we were finishing off our meal, a guy came around and handed out the song books for “Talent Time” … yep, it was karaoke night!  While I have been known to partake in song, I think my lack of body “ink” and facial hair would set me apart from this crowd in a way that would keep me way away from the mic.  Luckily, there were many “takers” to provide entertainment and within minutes it got loud in the building, just not from music, yep, hail again!  Lighting was crashing, the power went off, boy is this fun… At this point all we could do was order another drink and think about what shape the tent might be in now and enjoy the entertainment.

Check out the short video below…

Best Tent Ever! (hold that thought again)… After dreading what we would see when we arrived at the campground near midnight, once again we were surprised to see our tent standing in the head lights and in good shape after surviving two torrential downpours with hail.  At this point our thoughts turned to our plane, which was sitting outside in the weather about 30 miles away at Rapid City.  Our hearts were sinking as we watched the storm on radar move over KRAP, but there was not anything we could do tonight, but ride it out and hope for the best.  Our plans now included heading straight to the airport the next morning to see how Caddie made it through the storms.  More to come in the next few days….

New Video…. made with our GoPro Camera!

And as always… You can subscribe to our blog by entering your  e-mail address in the box to the right or “LIKE” our Face book page at https://www.facebook.com/2FlyAmerica and now you can “TRACK US” by clicking on the tab at the top of the page.