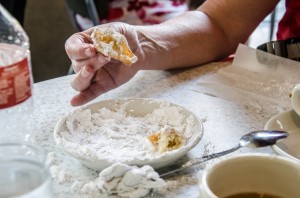 $100 Beignets??… In the spirit of the $100 hamburger, we set out for the land of sugar & spice and red beans & rice – New Orleans!  With a lot of long distance travel days ahead of us in the next few weeks, we decided to make a short hop, Saturday day trip to the Crescent City.  Years ago, when we lived in Laurel, MS, we went to New Orleans on a regular basis… Saint’s games, concerts, boat shows and even the occasional monster truck rally (yep, we are rednecks at heart – I really liked the “Grave Digger”). Since we moved to Madison, the 3 plus hour drive made it a less attractive destination and then Katrina came along, and well, you know….  Now it’s 2012 and things seem to be a little different in NOLA.

A friend of mine had told me that they had a cabdriver that they would call and he would pick them up at the Lakefront Airport and take he & his wife downtown and then pick them up when they were done exploring for the day.  So before we went “wheels up” at KJVW for KNEW we called Henry the cabbie. Henry was not sure if he could pick us up, but would make sure someone was at the FBO when we arrived. 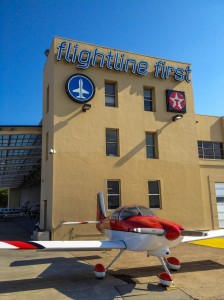 Caddy on the Ramp @ Flightline First

A little IMC…   We left the Raymond Airport (KJVW), for the +/- 60 minute flight to Lakefront (KNEW) in great weather.  As we approached Lake Pontchartrain, the clouds below us thickened and the likelihood of an instrument approach looked pretty good… not what was forecast, but, no problem.  “24G, descend and maintain 3,000”, this put us right in the middle of the clouds.  For the next fifteen minutes or so, we were in and out of the layer “over the lake”.  Finally, we saw Lakefront through the broken clouds and were given a visual to RW36L.  After landing, we taxied to the Flightline First FBO building and started to unload.  The line guy was very nice and allowed our cab to drive right up to the plane.  This was “red carpet” service for a couple of Mississippi rednecks!  He asked if we needed fuel and I said no… we only burnt 8 gallons getting here, it wasn’t worth bringing out the truck.  So we threw our backpacks in the cab and off we went to the Vieux Carré.

Irma Thomas’ Drummer… I asked the cabbie if he was Henry and he said no, his name was Larry and that Henry was on another “gig”.  As we chit-chatted our way downtown, Larry was telling us a story about running out of gas in the everglades and fending off alligators with guitars and drum sticks… OK, I’ll admit, I had not really been listening up until this point.  “So you play music?”, I asked, “Yep, I’m the drummer for grammy award winning artist, Irma Thomas”, he replied.  Cool, now thats a real story to tell…   Larry “Choo” Campbell went on to tell us about his travels in cars, busses and now airplanes!  He has been to many countries playing the drums for Irma and will be headed to Japan soon.  We enjoyed the rest of our ride into town with Larry and soon we were in the middle of the French Quarter where we parted company for our day of adventure. (BTW… I am now friends with “Choo” on Facebook, this guy is real cool!)

First Thought – FOOD!… So, what is the first thing you think of when you hit New Orleans on an empty stomach?  FOOD!  I “Googled” Cafe Du Monde to see how far away it was from where “Choo” dropped us off.  Not too far and Beth agreed with my plan – Cafe au lait and beignets for brunch and then a late lunch of cajun faire later in the afternoon.  We decided to split an order of beignets (Beth’s idea, if it had been up to me, we would have split three orders) to go with our coffee… It was as good as I remembered!  After our brunch, we started our photo walk. 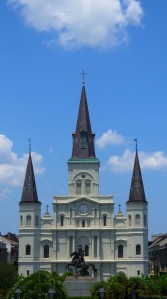 Taking Pictures… One of the things I wanted to do was to make this day into a photo assignment to take a lot of pictures to enhance my skills.  This was fun and Beth enjoyed it to.  I set up my tripod in a few locations and snapped some HDR shots and even tried a time lapse sequence.  I also got some interesting shots of street performers and the normal New Orleans targets.  We spent most of the day walking around, camera in hand, trying to look at things from a photographic perspective.  Later in the day, we even decided to take a horse drawn carriage tour that was very enjoyable and gave us an hour or so off of our feet.  I will be creating a separate post with some of the photos I took in the next few days…

More Food!…  After hours of taking pictures & walking in the quarter, we decided to get some  creole food before we flew home.  We were close to the Market Cafe on Decatur Street when hunger set in, so we worked our way into the outside porch seating area.  Nice shade and cool Jazz being played, set the stage for a great meal.  We had an order of boiled crawfish and the “Taste of New Orleans”, a sampling of seafood gumbo, crawfish etouffee, jambalaya and red beans & rice.  The only thing missing was a mimosa or a glass of cab, but since we were flying, that will have to wait until we got home.

After our meal we caught a cab back to KNEW and loaded Caddy up for the ride home.  The line guy at Flightline First thanked us for “prettying up” their ramp with Caddy! With a few late afternoon “boomers” on the horizon, we had to alter our route a little to the west, but eventually made it home safely at about dark with a camera full of memories and full stomachs. 🙂