Plan A… Yesterday we had signed up for the civilian fly-in at the Columbus Air Force Base.  We had our standard government paperwork filed to land at CAFB and we were excited about spending the day around the jets on base and spending some time in the simulators. The weather was looking good until we arrived at the Raymond Airport to depart… heavy fog.  We waited as long as we could for it to clear, but no luck and our time ran out.  In order to land at CAFB, we had a designated slot time for arrivals and if we were not “wheels up” by 0715 from Raymond, we would not make the slot.  At this point we threw up our hands and drove to Starbucks for coffee and a muffin and to come up with Plan B.

Plan B…  One of the things you learn as a pilot is to always have an alternate plan.  Our Plan B, was to go to the fly-in and camp out down at Pineville, LA (2L0) and check out the planes and eat lunch.  We have been to Pineville for their monthly breakfast several times, but not to the fall fly-in.  I started looking at the weather south of here only to see that it was still socked in near Pineville.  1/2 mile visability and 200 foot ceilings still  plagued south Louisiana, so we decided to rub on the plane for a while until the weather broke at our destination.  2 hours later and a call to the automated weather system at Alexandria confirmed the poor computer reports… It’s still low IFR.  Now we are getting stir crazy and ready to go somewhere.

Plan C…  We had been invited to fly to Starkville with some friends to watch Mississippi State play Tennessee, but had decided that flying home after an 8:00 game was not for me.   But, this is the south and 90% of the fun of college football is the pre-game campus environment.  So, Plan C turned out to be flying to Starkville, MS (KSTF), eat lunch at our old favorite place, Oby’s, and walk campus before the game.  This was perfect, after a great lunch, we spent some time shopping in the book store, visiting the Student Union, watching other college games on various TV’s and tailgating with friends.  After walking miles and covering the beautiful MSU campus we flew home to just in time to catch our Bulldogs on ESPN. 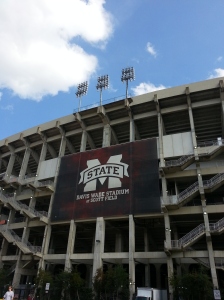 #HAILSTATE…  After waking up at 0500, this had been a long day… We were tired, but wide awake in front of the TV until 2330 when our beloved MSU Bulldogs defeated The Tennessee Volunteers 41 to 31.  Our now 15th ranked Bulldogs are 6 & 0 for the first time in many years and should be 7 & 0 when they roll into Tuscaloosa on the 27th of October to play the #1 ranked Crimson Tide of Alabama – GO DAWGS!