AFTER A GOOD NIGHT’S SLEEP…  Thursday morning came and we had the day planned to sit in on more forums than we could possibly squeeze in a day, but that was the fun of it – plan way too much to possibly get done in one day, so you are never NEVER bored!  That afternoon, we found a fantastic forum called, “Flying with your iPad”.  Since we both own iPads and we fly a “paperless cockpit” with them, we thought this might be the perfect opportunity to learn more about using them.  We got settled into the forum and it was a packed house!

IT WAS A DARK AND STORMY NIGHT….  Well, it wasn’t night, but the sky was looking like it.  That might also have been another reason that this popular forum was so popular.  People were beginning to crowd in and it was standing room only.  The speaker began his discussion of the virtues of the iPad and the wind began to huff and puff, then blow, then just downright howl.  The sides of these forum buildings (which are open on 3 sides) have heavy-duty curtains that can be let down to keep out wind, rain, dust or whatever else is blowing that day.  The curtains were let down and quickly, there was quite a commotion going on.   Some people began to stand up and well, of course, so did I.  The speaker asked, “How many of you folks are worried about your airplanes parked out there?” knowing full well that he had indeed lost the immediate attention of his audience.  About that time, I decided it was a good time to video whatever I could with my phone since I always seem to be about 10 seconds late in cutting it on and missing out on anything I’m trying to video.   I had my phone well over my head (since I’m short) and I thought that maybe it could see what I could not see.  It did record the impact of the storm and the howling of the wind, but neither it nor I could see what caused the entire back part of the audience to gasp and shout, “Oh My God!”

Okay, by this time, we were well beyond being able to pay attention to the very interesting speaker and his subject and were near panic with worry over our sweet Caddie and Big Broken Tall Agnes, so we picked up and left the forum.

UH OH…  As we quickly trudged back toward the plane, we noticed what everyone had been gasping over.  A beautiful, little yellow experimental bi-wing had been flipped over on top of a mini replica mustang.  Oh, what a terrible sight, but we couldn’t stop, we had to head on and find out the status of Caddie & Agnes.

As we got closer, Paul turned around to me and with a big frown said, “I don’t see our tent — again.”  We got closer and there lay Agnes again in a heap, but with Taylor’s sweet helping hand attempting to hold the tent up and keep the water off what he knew were some of our precious electronic toys inside.   I was so shocked that I never even thought to take a picture of the tent or Taylor holding her up this time.  As we began to pull the tent off our belongings, it became evident this time that the storm had felled the giant – Agnes would stand tall no more.  In fact, one of the things that we had thought was an asset, was in fact, not.  Agnes had rested on an incline and we had thought at first that would be great to divert water away from her and that was right, but we didn’t figure straightline winds into the scenario and that probably did us less favors by actually forcing the wind over and through Agnes at an accelerated rate – sorta damned if you do, damned if you don’t.   Our clothes, our iPads, our “juice box” which was our essential recharging unit for all things needing a charge at night,  our iPhones, EVERYTHING was soaking wet!  Paul actually poured water out of his iPad!  Taylor had done all humanly possible and had stood out there in the midst of the storm to save our stuff!  Tell me – WHERE do you find people like Taylor?  If they exist, most times you will find them affiliated with aviation in some way.   Thankfully, the Claw System had held Caddie steadfast to the ground and she had not moved an inch.  She was just fine and our new waterproof cover we had just bought for her had kept the cockpit dry as a bone.   This is the time when your airplane does double duty as the world’s largest clothesline.  We spread out the sleeping bags, pillows and other assorted amenities on the wings and hung towels off the prop 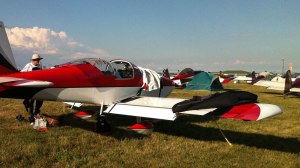 to dry.  As wet and wild as that storm had been, it was incredibly hot now and things were beginning to dry out very quickly.

HAD ENOUGH YET?…  Well, reality set in when Taylor actually offered to let us sleep in their tent stating he would sleep in the plane to make room for us.  And know what??  I absolutely believe that he would have!  But this blow we’d been dealt finally broke us this time.  Taylor walked with me to the dumpster as I carried Agnes’ remains and he lugged along the remainder of her tent stakes and rain fly.  We gave her a very quick funeral aka – open the dumpster and toss her in (I did finally remember to return later & snap her picture).   After we left there, we walked back over to the sight of the flipped planes and once again, Taylor jumped into action asking if there was any way he could help.  He began carrying parts of the destroyed bi-wing over to another section of the field where the loose parts were being stowed.  Once again, what a kind hearted soul.

IT’S ONLY MONEY…  Paul began to call around as we no longer had a tent and now needed a place to rest our heads for the night.  While he was on the phone,  Tom Poberezny, former EAA Chairman of EAA Fly-in & Convention, came by and actually asked us if we were okay and if we needed help.  If you have any idea who Tom Poberezny is, it’s very much like God himself asking you if you could use a little help.  We thanked him and said we were okay and had located a place to stay for the night.  We had indeed found a place to stay – Paul had been on the phone calling area hotels to see if they had any vacancies.  This is very much like calling around at night during the Olympics just to see if hotels had any vacancies.  Yep, somebody’s going to have a vacancy, but somebody’s gonna pay!  So, in no time at all, we loaded up everything we could carry, wet and not, and walked a mere 2.5 miles to the cheapest $250 a night hotel one could ever have!  It frankly was worth every penny – I think I took 2 showers that night, but we slept in air conditioning in a dry bed and we were thankful for it too.  Oh yeah, we did manage to find a little wine to soothe our pain while we poured more water out of our electronic toys.  Thankfully, only the juice box bit the dust.

BACK FOR MORE!…  One might think with all that went on, that we would pack up and abandon any further idea of ever returning to AirVenture – Oshkosh!  In fact, it’s quite the opposite.  Where on earth would you ever find such helping hands and 500,000 people with at least ONE thing in common?  The aviation community is quite a giving, generous and loving community in it’s own right.  Granted, like with any other large group of people, you do have some that don’t quite fit the bill, but that’s the exception rather than the rule.  Frankly, I cannot wait until next year to return to Oshkosh, with our new tent in tow, and a chance to meet new fresh faces and catch up with lots of old ones.  It’s something that makes precious memories even more precious, year after year.

And as always… You can subscribe to our blog by entering your  e-mail address in the box to the right or “LIKE” our Face book page at https://www.facebook.com/2FlyAmerica and now you can “TRACK US” by clicking on the tab at the top of the page.